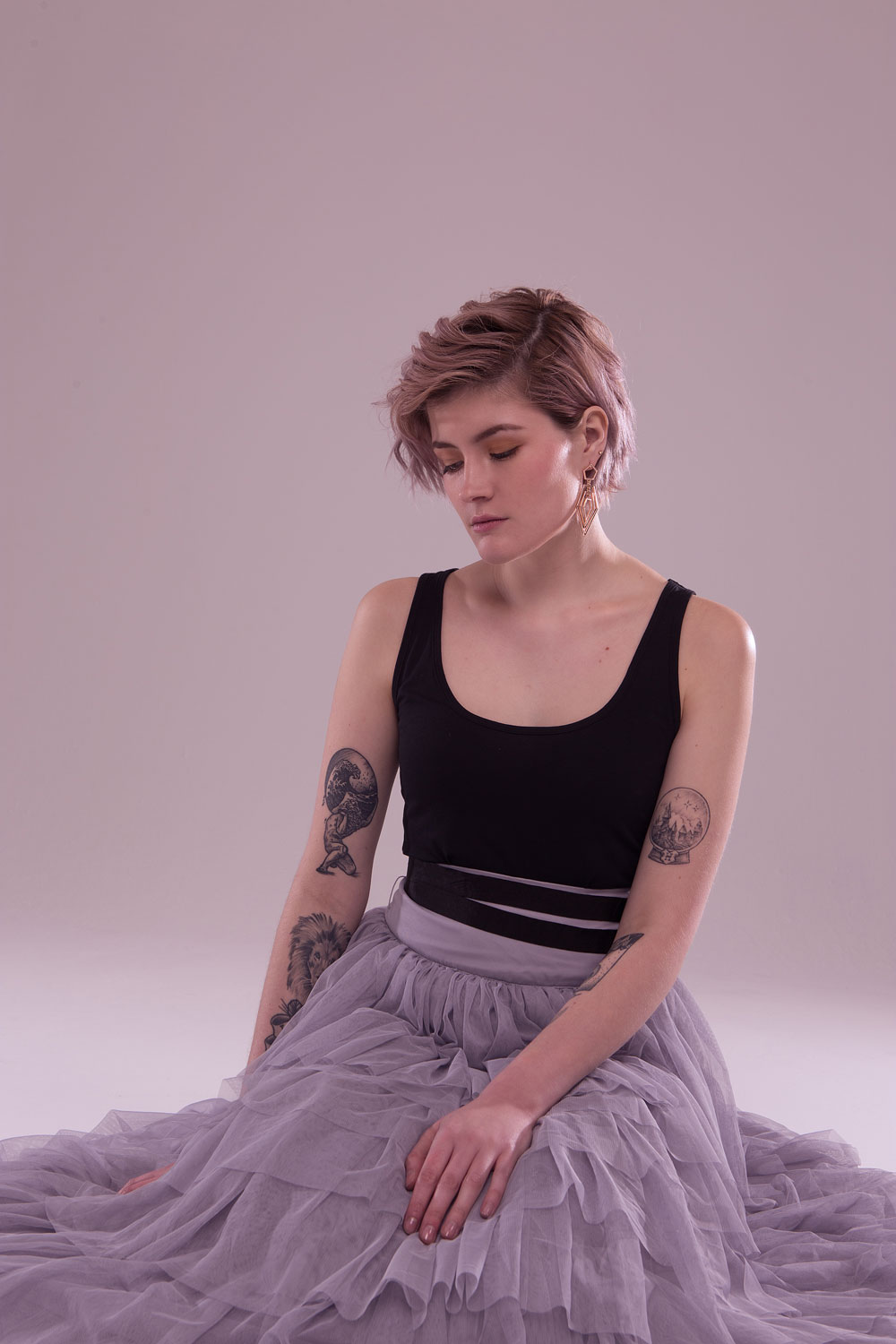 Madeline Juno is a storyteller. And even though she’s young and captivatingly beautiful, her stories however are far from being only pleasing. Her songs are ambiguous and melancholic, they tell of sleepless nights, missed teenage years and doubts; they’re utterly lovestruck and unrestrainedly honest. Without any vanity Madeline tells her stories all wrapped up in pop sounds and in a way we can only believe her every word. She tells us about her life.

Growing up, Madeline felt as though she was stuck in an in-between world. It might have been the fact that her parents were musicians themselves who had regularly held band rehearsals in the basement of their own home and toured from one local club to the next on the weekends that made young Madeline take a musical path, whereas hers started out much more secretly. Be that as it may, her career started out in that very basement rehearsing room which she convinced her parents to let her turn it into a bedroom when she was only eleven years old. Two years later, videos of herself performing her own songs in her bedroom were to be found on youtube.

„My parents would have instruments stored all over our basement and I spent days and nights trying to get that damned F bar chord right on my uncle’s electric guitar. I remember one of the first songs I’d come up with I wrote about shadows upon my wall that were trying to scare me back upstairs. I ended up writing about how I fought them with swords and knifes though.“

Most of the songs she had uploaded were written in english. And in fact, she could – her passion also had something to do with her ambitiousness. „Just when I had started to write songs and dived into my own world of all these american bands that none of my friends from school had ever heard of, I stumbled upon the Ellen Degeneres show and became her biggest fan. I’d often dream about what it would be like to be on her show, sitting next to her on that sofa seat, chatting about crushes and my songs. So I figured – if my dream was to make it on the Ellen Show, why would I want to make it harder for myself and not write in English?!“ But first a Hamburg based team of producers had discovered her youtube channel online. And though it had taken Madeline a few weeks to get her skeptical parents to let her reply – their collaboration was sealed months before she turned 15. So, the world she’d found access to, suddenly was of a very professional kind and was quickly meant to  be kept even more secret. Consciously Madeline kept herself away from clubs, parties and rhapsodies and spent every possible free minute in the studio, working on her first record.

„Frankly, I felt so lost. In school for instance I’d be present but in my mind I was far away from home, thinking of whatever had to be done next in the studio once I would get to go to Hamburg. All I could think of was releasing this record and not only proving to myself but to people around me, that living one’s dream is actually possible. That’s what I focused on.“

When she finished getting her A-levels at 18, she had finally cleared the way for her first album „The Unknown“. Her debut album that changed her life so much, she even tattooed her favorite quote onto her forearm. „Hardly anyone had heard or known my songs back then – this record was the unknown I was willing to take my fans with me to.“ For the first time Maddy opened up the world she’d lived in by herself for so long. What was built up in her basement bedroom and was kept secret for many years became a huge success – for herself and with the help of box office hit „Fack Ju Goethe“  which her first single „Error“ was chosen as the title song for. What a relief it must’ve been, releasing an album and finding her drive in opening up to other people.

„I want the listeners to know who I am. I want them to feel less lonely when they find themselves drowning in an ocean of emotions – because I feel just the same way they do.“

A relief that only her new album „Salvation“ could have made possible. The deliverance from her teenage years Madeline sometimes feels like she’s missed out on that she wrote about in „Youth“ and the eponymic „Salvation“ from self-imposed compulsions. „A few years ago I used to be afraid of sounding too poppy. I didn’t like the idea of my music distancing itself from my singer-songwriter background. This time I finally let loose and let myself be as free as a bird with my songwriting and the production. We’ve absolutely gone mental experimenting with new sounds in the studio. Breaking free from thinking „I have to sound as melancholic as the subjects I’m writing about“ – that’s what brought me closer to salvation.“

For the first time Maddy let other musicians be part of her songwriting process. „Allowing myself to work with other people changed my world. Not too long ago I used to think I was not meant to write anywhere else and with anyone else but my guitar, my piano and my recording software. But finally letting the right people into my life and my songwriting made me grow up and learn so much more about self-confidence.“ Salvation is the great escape of a limited spectrum of sounds and straitened self-perception.

„I literally change every single day. I don’t even want to tell myself, how and who I have to be and in what way I have to or mustn’t do things. The idea of polarizing doesn’t scare me anymore, it’s much rather fascinating and exciting to me now. I reckon that’s what made it so much easier expressing myself and being so much more of myself on this album.“

Her fans will approve that despite of everything that’s changed, Maddy surely is just as honest on „Salvation“ as she was on „The Unknown“. Why else would she have chosen to have a song called „Stupid Girl“ be her first single, with which she’s clearly referring to herself? „Stupid Girl“ might as first seem like a blunt pop-track which after having given it a close listen is built on shaky grounds of uncertainty and scepsis: „Now every little thread’s like a lifeline, and I’m tearing at the seams. But then again I know I’d still get wasted on a cheap wine so you’d take advantage of me.“

„When I’m in love, I’m in love 300%. I can’t keep myself from looking into the future and „what-could-be“s and then again get scared of all the things I want to say or do.“

When writing „Toes“ Maddy imagined herself to be a fragile ballerina you might still be able to find in out-fashioned jewelry boxes, helplessly spinning in circles. „I’ll hold my breath, will you build a home in my chest? I’ll hold my breath, God, I hope I’m acing your tests, I confess. Keep me on my toes.“

The only ballad that is to be found on „Salvation“ is called „Please Don’t Have Somebody Else“ that crawls beneath our skin at the question „Maybe you’d be someone that I’m good at?“ at latest. While „Yellow Car“s simple storytelling might make us dance to electronic drums and synths, „You Know What“ isn’t seen through just as easily. Its’ composition and production may take us back to the 80’s but only who listens closely will be able to find a decent amount of fatalism and meaningful metaphors referring to one of Maddy all time favorite movies’ protagonists Enoch and Annabel.

„I feel as if today I find it much easier to actually just be blunt and say how I feel in my songs. I’m so thankful for all of my team for having let me be the head of this album and for having let me take the production right to where it is now.“

After a whole year of songwriting and production, „Salvation“ will be introduced to the world in early 2016, consisting of 13 tracks that fans will find are 100% Madeline Juno. A few more songs will find those, who purchase the deluxe version of 18 songs, including 2 German songs that used to only be found on youtube before. The tattooed girl with the guitar has grown up to be a confident young woman, letting her stories fly out into the world. Stories that one day she surely will tell Ellen Degeneres about.